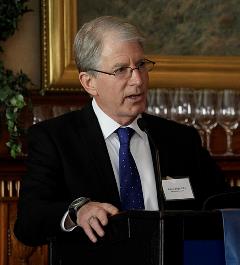 Robert Fligel, a consultant specializing in CPA firms who spoke at a recent NYSSCPA CPE event, said that while the global pandemic has slowed merger-and-acquisition activity among CPA firms, it has by no means stopped, and there remain many opportunities for owners looking to sell or merge their practices.

Speaking on July 8 before members of the Society’s Small Firms Practice Committee, Fligel said that since the middle of March, he has had “a lot of meetings with buyers and sellers.” While the process is slower, as “the in-person meetings haven’t happened yet and timetables may be stretched out a little bit,” there is still interest among firms in mergers as part of their overall growth strategies.

This is important to know, according to Fligel, because mergers remain a viable option for smaller firms that lack a successor. Many firm leaders, he said, have tried very hard to find a future partner who can succeed them in various ways, but “you can count the true success stories on one hand.” Although owners might not want to think about these matters, he said that the reality is that it will become an issue whether or not they choose to do so, whether due to age, health issues, money or something else. While some people decide to “tell [their] clients a year ahead of time [that they’re closing] and have a slow exit from my practice,” most people have put [their] whole life into it and—whether it’s a half million dollar practice or a $50 million practice—it’s got value.” This is why many smaller firms turn to M&A rather than just slowly shutting down their business.

Fligel warned, however, that this process can take a long time and advised against starting it at the last minute. Firms looking to sell should start early by identifying some prospects and making connections, perhaps at the Society, “so ideally, when the time comes when you are ready to do something, you’re not starting from scratch, since it’s a very time-consuming process that takes you away from work and family. If you can lay some of the groundwork early, I’d really encourage that.”

But he also warned that buyers have become more selective over the years: While the market is still quite active, it is far from the frenzy of activity that was seen about 10 years ago. At that time, it seemed, almost everyone was looking to acquire a CPA firm, even those that had only tangential connections with the profession, such as American Express. But now being acquired takes a little more. Firms looking for merger candidates want particular assets, such as a practice specialty they lack, a younger staff or a different geographical location (Fligel noted that many recent mergers were by firms from the Midwest and South wanting to establish a New York presence).

What they don’t want are “firms of maybe one, two, three partners that are struggling a little bit, don’t have an internal successor, and maybe have trouble keeping up with technology—and their client base may be a bit older.” And so if owners understand that they have problems in their firm along these lines, addressing the problems will make the firm a more attractive buy in the long run.

Fligel also warned against several pitfalls that he has seen in the M&A process. One is a psychological factor, whereby the former owner has to get used to no longer being the top person in the company. Many people who have had their practice for years, he said, have grown accustomed to themselves as “the big boss—they sign the checks, they make the decisions” until, “all of a sudden, they’re not.” While the more successful acquiring firms recognize this factor and take care to comfortably integrate former owners, even in this case, “the first year is really, really hard.”

Another factors is people having unrealistic expectations about what their firm is worth. Fligel recommended that before starting any merger process, owners should talk to other practitioners who have merged into other firms as well as attorneys who have done deals similar to the one being pondered, and anyone else who could offer advice and perspective, as well as possible alternatives.

He advised that sometimes people focus a lot on the dollars and cents but completely neglect culture—to their detriment. Sellers should consider how a potential buyer handles specific client situations. What do they do, he asked, if a client wants to take a very aggressive tax or financial reporting position? Sellers should ask buyers, for example, about recent past circumstances when they have had to draw the line and say no to a client.

Another point in this area is how the firm handles perks, “the non-business business expenses.” Some firms are rather loose about these things while others are more strict, and differences between buyers and sellers on these matters can sometimes cause unexpected conflicts. While there are structures to mitigate differences of opinion in this area, he noted that where a firm stands on this can “speak to that person’s values and philosophy in general.”

Along the same lines, Fligel also recommended that sellers keep personal affinity in mind as well—do they like these people? He said parties in an M&A deal should “definitely have some after hours get-togethers—at least one dinner with all the partners, and maybe another one with partners and their spouses because you never know what you’ll find out.”

Finally, he advised sellers to trust their instincts.

“If you have any doubts about a firm being a good prospect—even if the economics are wonderful—just don’t do it,” he said. “Simple as that. I’ve heard people say things like, ‘I can’t put my finger on it.’ Well, first of all, you should be able to eventually, but even if you can’t and it still keeps bothering you, don’t do it.”