American Institute of CPAs president and CEO Barry Melancon talked about the need for CPAs to learn new skills as hiring of accounting graduates has slowed and the CPA licensing model has come under threat in some states.

“There’s a lot of action in the states,” Melancon noted during a speech Tuesday at a meeting of the Accountants Club of America in New York. “There are major forces at work, and lots of big money, to unwind in the states the basic licensing regime that exists in this country. It’s not just targeted to CPAs, but it’s targeted to all licensing. Now that doesn’t mean it’s manifested itself in every state, but it’s manifested itself with attempts in probably about 35 states over the last four years. We actually lead a coalition today, and we’ve brought the learned professions together. There are forces both on the conservative and the liberal sides that would like to see state licensing regimes unwound, for different reasons, but with the same objective. The liberal side argues that the licensing regime is just a big conspiracy to deny access to certain types of jobs to underprivileged people. They’ll use, as a sort of poster child for that, certain trades — as opposed to professions — like hairdressers and things of that nature.”

Advocates of this position see no need for hairdressing or check-cashing establishments to be regulated. “But they don’t mean just those types of things,” Melancon added. “They also mean engineers and CPAs, and actually in one state an attempt including the medical profession. Arizona had a bill that passed one of the houses of their legislature that actually said you could do anything and you don’t have to be licensed. All you had to do was tell the person you provided the service to that you weren’t licensed. So if you wanted to practice medicine, you could literally, under that law, say, ‘I’m going to provide medical services way. Oh, by the way, I’m not a licensed physician.’ The conservative side is there too because they see this as a way of breaking down bureaucracy and big state government.” 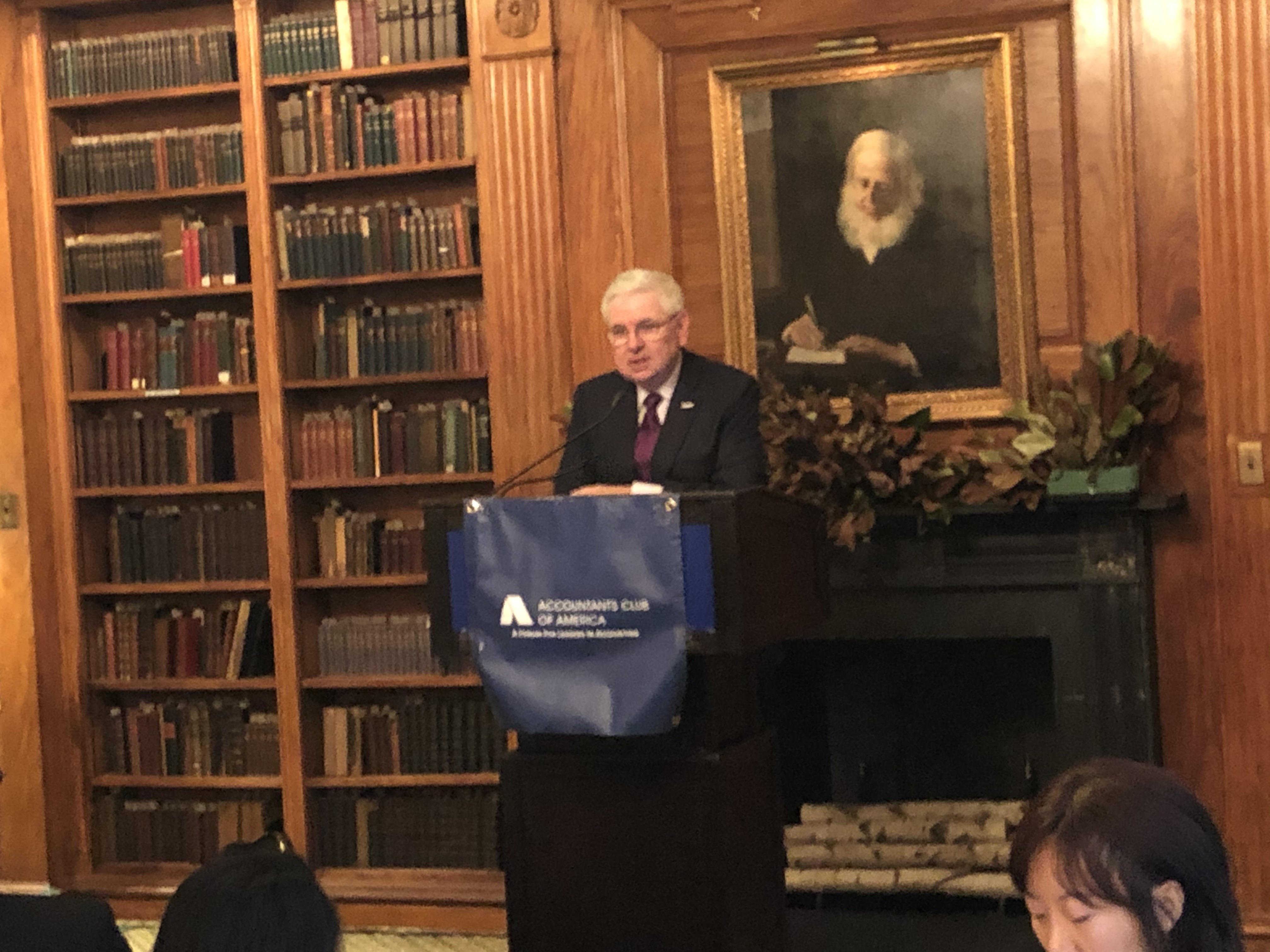 “This is a national trend, and I’m just telling you, there’s huge money,” said Melancon. “People who have certain political views that are very wealthy are funding these things through think tanks, etc. We’re leading a coalition as it relates to the learned professions, saying there’s a public interest to certain types of things and there’s a reason for it. You could debate all the other licensing however you want, but as it relates to the learned professions, we need to protect that.”

While there’s still demand for hiring of CPAs and other accounting graduates, Melancon also sees some slowdown as more firms hire technology experts to bolster their audit teams. “Hiring of accounting graduates over the last four years by public accounting firms is down 31 percent,” said Melancon. “Total hiring is basically flat and proportionally slightly down. If we don’t find a way to put those other skill sets, predominantly technology, into the CPA Evolution, we’re going to continue to see that equilibrium change.”

The AICPA has been working with the National Association of State Boards of Accountancy on an initiative called CPA Evolution to transform the CPA licensure model to teach more technology skills to CPAs.

“For almost everyone in this room, when you first started out in auditing and went out on an audit, everybody on the audit team was either a CPA or eligible to be a CPA,” said Melancon. “That is not the case today. We are seeing audit teams with CPAs as a minority on those teams. And if we don’t change the definition of CPA, and embed technology in the definition of a CPA, those numbers are going to continue.”

He believes it will be harder to argue for state licensing of CPAs, even with firms that are at least 50 percent owned by CPAs if the people doing the audits are mostly not CPAs.

Melancon is also seeing threats in Congress, as the number of CPAs and accountants in Congress who were part of a CPA Caucus has plummeted. “About four years ago, we had a record number of CPAs in Congress, at 10,” said Melancon. “Probably after the November elections, we’ll have maybe four or five, depending. One is contemplating not running for re-election. Not because they’ve gotten beaten, but because they have chosen not to continue to run. Our delegation in Congress was bipartisan, and also we included a couple of people who were accountants that were not CPAs, but had been educated and did everything but pass the CPA Exam, like Senator [Mike] Enzi from Wyoming. He’s not running for re-election. He was our mainstay on the Senate side. As a result, certain things like independence and FASB and accounting standards are being attacked and will continue to be attacked, with some reason. CECL and the issue of how you value loan losses is a big one Congress is exercised on. It’s not going to go anywhere right now, but the fact is that some of the dialogue is being planted. We’ll see what happens in the next Congress with its makeup, etc.”

Melancon is not expecting to get much tax legislation passed this year, after the IRS reform legislation known as the Taxpayer First Act passed last summer, and some tax extenders and technical corrections were included in year-end appropriations bills.

“There will be some talk about federal legislation on taxes,” he said. “None of that is going to pass. There may be a small additional technical corrections bill that could get through. We are working very hard to have it be a modernization of the IRS bill. We also lead a coalition that says that the IRS has to change its ways and it needs to have a focus on the preparer.”

One of the priorities of the coalition is to convince the IRS to set up a Practitioner Services division (see our story).

The AICPA has also been working on several technology initiatives, including a seven-year effort to establish a .CPA top-level domain that CPA firms will be able to use as part of their internet addresses. Melancon expects to see that roll out shortly after tax season. “It will be part of the digital identity of this profession going forward,” said Melancon. “It will be global because CPA is not just in the U.S. It is going to be a way to add credibility.”

In addition, the AICPA has been working with a group of around 35 small and midsize firms on developing a Dynamic Audit Solution that will enable them to use data analytics technology to make the audit process more efficient and compete better with the larger firms. “I think it’s a hell of a tribute to this profession,” said Melancon. “It’s effectively a $100 million project with $40 million in cold cash put up by these firms. And the outcome is to be redesigning our core service and it’s going to be made available to everybody in the profession. It’s going to be delivered on a per-seat licensing basis so that smaller firms can access it on a proportionate basis. That is one of the key elements. There are about 10,000 firms that do audits in this country and if they want to continue to do audits, I want them to have the capacity to do so and not be frozen out of that purely on the technology point.”

“I think the profession holds independence and objectivity near and dear to its heart,” Melancon responded. “But I also believe that rules that get written decades earlier also have to be reflective of what the current environment is. For instance, there used to be an independence rule to define independence on an audit team based on the number of miles the person’s home office was, or work office was, to the client. Now, in retrospect, when we think back about that rule, that sounds pretty silly today. If you were more than, say, 50 miles away, that was considered a big hurdle, and independence was a lower hurdle if you were more than 50 miles away. We’d say that doesn’t make any sense today. What the SEC is looking at is there are some rules that need to be modernized, to be reflective of today’s world, not a step back on independence or objectivity, but actually I would say a step forward and make it as reflective as possible of how the real world operates today and still have public interest protections.”

Melancon also paid tribute to the late Stuart Kessler, a former president of the Accountants Club of America and the New York State Society of CPAs, and a former chairman of the AICPA (see our story). “His passion for the CPA profession and passion for this club had huge impacts on me personally,” he said. “He was a person I learned a lot from, and learned a lot about New York from, including his stories of Brooklyn College, and he was just an incredible human being and an incredible CPA.”